Hale Barns CC would like to thank our main sponsors UK Fast, as well as Vimto and B&M, for their fantastic support which has contributed to such a successful period for the club.

There have been promotions for the 1st and 2nd XI over the past couple of years which has seen HBCC become a Cheshire County Cricket Club, while the 1sts also enjoyed cup success by claiming the Cheshire Shield in 2018.

The club has also benefited from major improvements to the ground in recent years, with investment on new nets, pavilion facilities and tremendous development on the playing wicket and outfield, led by Ground Committee Chairman and 2018 Clubman of the Year Ian Schora. 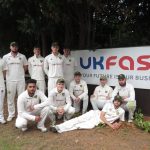