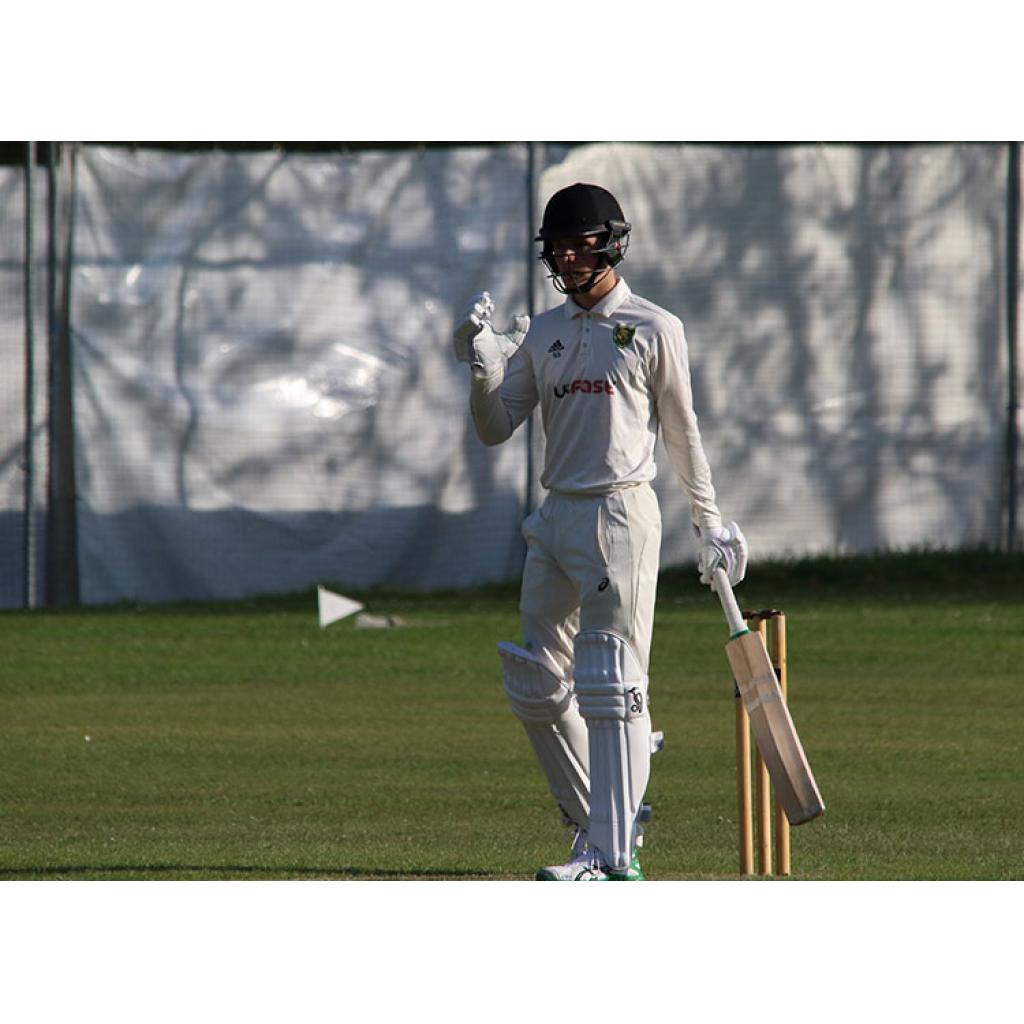 The 19-year-old made the most of his first opportunity in the Seconds having played a bit-part role with the First Team this year, taking three wickets before striking a superb unbeaten century to help HBCC rise to fourth in the table.

“I enjoyed it today,” said the young all-rounder. “I haven’t really bowled all season, so it was good to be involved and then it was great to have the opportunity to spend some time at the crease and get some runs.

“Playing in the Firsts this season has definitely helped because you’re facing really good bowlers who give you less bad balls, so I’ve learned how to structure an innings and look for singles rather than just going for boundaries.

“I left quite a lot of balls early on and made sure I was finding the middle of the bat and then once I was comfortable, I was able to play more freely and be aggressive. It’s a great feeling to score my first hundred.”

Bollington openers Matt Dawson (22) and Jack Hanson (20) made an attacking start to the day with some wild strokes and rode their luck with a couple of drops in the field before Smith broke the deadlock by removing both before James Fullerton-Batten (1-14) struck to reduce the visitors to 49-3 after 16 overs.

Jack Wylie (0-43) bowled 15 overs straight from the top end for the second successive week, but was unrewarded despite beating the bat on numerous occasions as Matt McGuiness and Ged McKernan slowly edged the score towards three figures.

Although the away side kept wickets in hand, they struggled to accelerate the run rate, with McGuiness finally departing to Callum Schora for a tentative 34 off 100 deliveries.

And having been 126-3 with eight overs remaining, Bollington suddenly lost wickets in a cluster as Schora (3-33) added two more to his tally and claimed a run out, while Smith (3-40) returned to the attack to dismiss McKernan for 51 and restrict the score to 164-8.

Barns immediately put themselves under pressure with the loss of two early wickets off the bowling of Oli Nolan (2-46) with just six runs on the board, bringing Smith to the crease along with opening batter Fullerton-Batten.

After the pair had weathered the storm, Smith became more expansive with some clean hitting, progressing the total onto 76-2 from 17 overs. However, Fullerton-Batten fell shortly after a drinks break for a patient 18 to bring Bollington back in contention.

But Smith was in devastating form and reached his half century in quick time, while Sanjeev Bhatia (21 not out) – playing in his first league match since 2001 – brought composure at the other end.

The duo proved to be a terrific pairing, putting on 89 together to steer Barns to the required target in 31.3 overs, with Smith smashing his maiden century before ending on 116 not out from 94 balls, hitting 13 fours and 7 sixes.