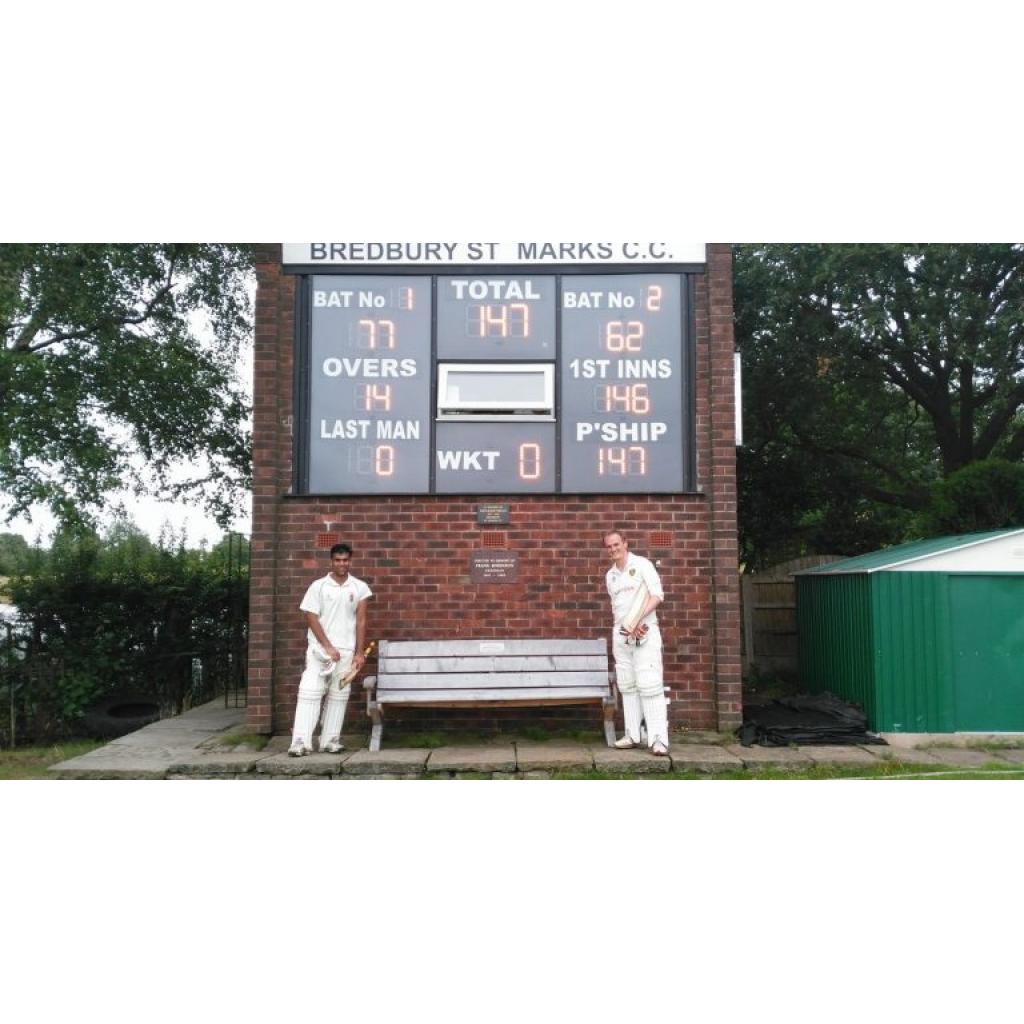 Farhan Rabbani and James Fullerton-Batten were in destructive form as they both hit unbeaten half centuries to help Hale Barns Third XI record a crushing 10-wicket win against Bredbury St Marks.

The pair successfully chased down a target of 147 in less than 15 overs to secure a first win in eight games since the team beat Romiley on June 11.

Barns were immediately on the front foot when Jack Wylie produced a breakthrough in the third over with the hosts yet to trouble the scorers.

Wylie and Dan Martin (0-24) bowled with great control and didn’t allow the batsmen any respite, although neither could make further inroads.

Fullerton-Batten (1-8) continued the tight bowling and produced a deserved breakthrough as Bredbury maintained a leisurely run rate of barely two-an-over.

David Norris and Geoff Mountford grinded out runs in a bid to repair the innings and were then the beneficiary of some wayward bowling in the middle overs as Barns racked up 27 wides in total.

Aaron Schora (1-18) got his radar tuned in and broke the lingering partnership as Mountford (29) played a loose drive towards cover point, where Fullerton-Batten produced a stunning diving catch to his left.

Junaid Iqbal (1-39) was less consistent with a mixed bag of full tosses and unplayable deliveries, but his spell paid dividends as he held onto a return catch to dismiss Norris for 34 with his final ball.

A seventh bowler was introduced into the attack with Ahmed Choudhry (1-15) getting a go and he took advantage with an excellent four-over spell that was rewarded with a wicket.

The visitors restricted Bredbury’s scoring rate dramatically in the final 10 overs and removed the threat of Josh Ireton (15) who attempted one big shot too many as he skied one straight up in the air for Wylie (2-12) to claim a caught and bowled.

Wylie then produced a run out in the final over as the hosts failed to accelerate at any stage of the innings and posted a below-par 146-7, with 48 of those being extras.

Opening pair Rabbani and Fullerton-Batten knew they had to approach the run chase with attacking intent due to the forecasted rain and began the onslaught, although the latter was fortunate to survive a confident lbw appeal first ball.

With both batsmen finding the boundary with regularity it was a race to fifty, which Rabbani won in just 36 deliveries, soon followed by Fullerton-Batten’s 40-ball half century, while the Captain also claimed the ‘longest six’ prize too with a huge strike that damaged the slates on the roof of a nearby house.

And he then sealed the result with another maximum as Barns completed a remarkable run chase in just 14.5 overs, with Rabbani ending on 77 not out from 45 balls and Fullerton-Batten scoring 62 not out from 46 balls.