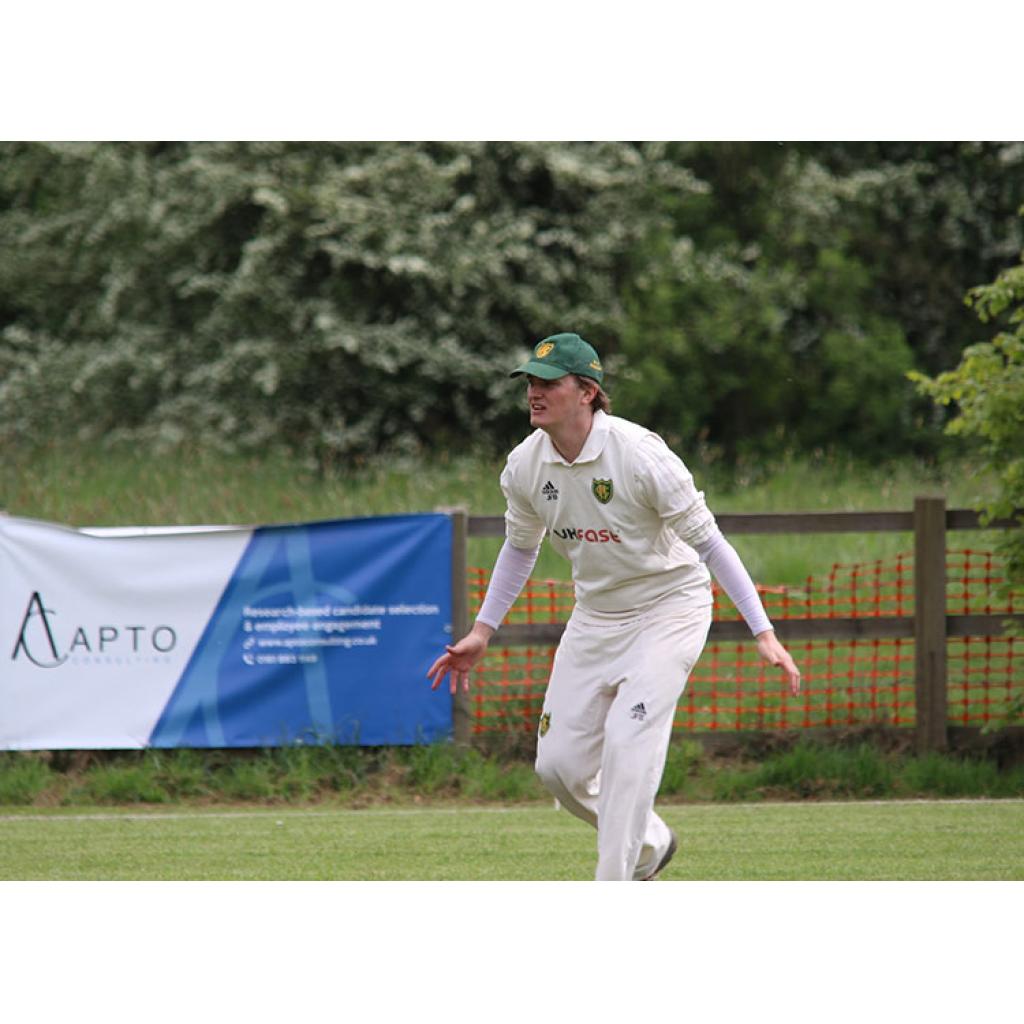 James Fullerton-Batten scored his first ever century, but his terrific efforts were in vain as Hale Barns Second XI had their promotion hopes all but ended after losing to second-placed Davenham CC by two wickets.

Mike Hunter also contributed with 58 to help the visitors post an impressive total of 209-6. However, Davenham achieved the target with five overs to spare to extend the gap between the two sides to 36 points with three games remaining.

“It’s a tough loss,” Fullerton-Batten said. “I thought we batted well and they’ve done very well to chase 210. Having fielded in the heat, to go out and chase that target is a good effort. We could’ve fielded a bit better but we’ve put in a decent shift ourselves, so we were unlucky really.

“Our problem this year when we’ve lost has been batting, so today was a different experience for us having put on a good score. We’ve also had five games washed out, so that’s hampered us and this loss has probably ended our promotion hopes now.

“Davenham finished third last year, Lindow are always strong and Widnes came down from the division above, so we’re up there with some good teams and I think with better availability and possibly one or two additions, we can challenge again next year.”

The home side won the toss and claimed the upper hand early on, with Sam O’Sullivan (2-29) and Michael Hitchens taking a wicket apiece to restrict Barns to 11-2 from eight overs, bringing Fullerton-Batten and Hunter together at the crease.

The pair immediately appeared to get to grips with the pitch and comfortably raised the run rate without taking many risks, surpassing a 50 partnership within just 11 overs.

They were soon in a race to reach a milestone and it was Hunter who got to his half century first, quickly followed by Fullerton-Batten as the duo took the score to 139-2 with 15 overs left.

However, having looked in imperious form, Hunter was suddenly on his way for an excellent 58, although a swift 16 from Andrew Willis maintained the scoring momentum.

And Fullerton-Batten capitalised on a couple of missed opportunities from Davenham as he capped off a magnificent knock by sealing his maiden century, which included 14 boundaries and plenty of good running between the wickets.

Hitchens (3-41) finally brought his innings to a close for 101, while a couple more late dismissals cost HBCC the opportunity to go through the gears in the final few overs as they settled for 209-6, denying Davenham a potentially crucial bowling point.

In reply, the hosts made a positive start as they remained unscathed with 37 runs on the board before both openers were sent back in quick succession to keep the game in the balance at 49-2.

First, Jimmy O’Sullivan (16) chipped a Jack Wylie slower ball to Willis at mid-wicket, then Dave Saddington forced Mark Jones into a mistake as he departed for 27.

Wylie was incredibly unfortunate not to make further inroads having beaten the bat on countless occasions, while a handful of edges all went through the slips and away to the boundary.

And having seen off the barrage, Samuel Robbins and Will Jones built a strong partnership, adding 68 until Jones was finally bowled for 35 by Saddington.

Robbins (53) reached his half century before falling to Jake Romer (1-52), but the hosts continued to accumulate runs at a reasonable rate, progressing onto 180-4 with 10 overs remaining.

Saddington (3-55) finally picked up a third victim and the re-introduction of Wylie (2-60) into the attack brought more success before Fullerton-Batten (2-6) took two wickets in two balls to set up a grandstand finish with seven runs still to get.

However, Davenham captain Phillip Sharples finished unbeaten on 47 to help his team edge over the line as Barns were left to rue some controversial umpiring decisions and a couple of important dropped catches.

Fullerton-Batten added: “Coming in at 11-2, it put the pressure on Hunter and I, but fortunately they were serving up enough loose deliveries, so it wasn’t that much of a grind.

“It’s a good feeling to get the ton. Previously, I’ve scored one 50 this year and not much else. Batting and fielding are what I contribute to this team and I’ve not done much on the batting side so far this year, so it was nice to get a knock and go big.

“It was great to grab a couple of wickets, too. My eyes were lighting up when I was on hat-trick ball and then I ended up bowling four leg byes, so that probably summed up the day really. We were close, but hats off to them for getting the job done.”